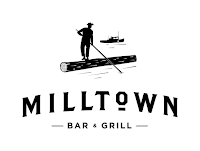 Web Presence: Clues and hints for the upcoming week can be found on their facebook page.

Team Info: Up to six people. Got more? Split into two teams!

Prizes: There's a 40 dollar gift certificate (redeemable future weeks only, alas), with a random prize for second-to-last place as well. Copious amounts of shots to be won in-between the rounds on bonus questions as well.

Format: Four rounds, twelve questions. Questions can be worth any number of points. There's also arbitrary enthusiasm points to be won as well.

Food and Drink: Good burgers, and tasty pizza to be had. The menu is pretty extensive, so chances are good you'll find something to eat. It's burger night on Thursdays, which means carnivores get a pretty sweet deal on a burger and a beer. Pretty straightforward beer selection, but $5.25 Pale Ales and $6 boozy Arnold Palmers are a good game day specials.

The Milltown Bar and Grill is one of the few quizzes in Vancouver that is located on an island. I'm trying to rack my brains to think if there is one on Granville Island, but I'm not sure there is - so I guess that we can safely say that this is the only trivia night you'll find on an island. It is also the only quiz in Vancouver that is in Richmond.

Wait, what? The Milltown is on Richmond Island, a tiny island just North of Vancouver International Airport, and only accessible through Marpole. De jure Richmond, de facto Vancouver. It has great views of the flightpath, and if you happen to have a boat, you'll have few problems docking at the nearby marina. I assume. I don't have a boat. For such a far-flung locale, the bar is cozy, warm, and quite full. Most of the tables were playing trivia, so it is safe to say the community here is doing quite well. The food is good, and the staff are super friendly.

But, how's the quiz? I imagine that is why you are here. In a Vancouver where quiz companies are extending their reach across multiple bars, it is refreshing to find a new quiz that has a personal touch, and isn't another franchise of a larger concern. It's four rounds of homespun questions, with plenty of sports, and plenty of multiple point questions. There's a fair share of true or false, and the tried and true maxim of "pick whichever answer seems less likely" held up pretty well here. Is 90 mile beach actually 90 miles? Of course not! There was a fair number of difficult questions (the Welsh name of the official residence of the Prime Minister?), but mixed in a few softballs that could be answered by looking at one of the many televisions (Who was playing in the Thursday Night Football game).

In a rarity for quizzes about town, there was no music round. However, if you're an extroverted type, there were ample opportunities to get bonus points by going up and singing a song during our theme round on Pop Princesses. Whether or not you got any points, and how many you got, appeared fairly arbitrary, but that's how it goes sometimes. The theme round, I might add, is nominated and voted on by quizzers the previous week, which I think is a pretty cool idea. The "vote via hooting and hollering" is something I find a bit tiresome, especially as the night stretches on, but the crowd digs it here. There was also a "Win Two Shots" minigame at the end of each round - the quizmaster would load up imdb and read out movies until one of the gathered people submitted the actor that had a role in all of them. Ties are broken in a fun manner - one representative from each team goes up, and goes had to head trying to name more of something (the five largest buildings in Vancouver, the elements that start with the letter 'A'), which I think is a great tiebreak.

It was a fun night, though a late 8:30 start can make getting back a little tricky if you don't live in South Granville, or drive. There is a shuttle service available for patrons who have four or more drinks, but we didn't quite reach the cutoff there. Fortunately, airport proximity mean cabs are easy to come by. It's certainly a quiz I will come back to, but likely in the summer, when the walk down the causeway to the bar is warmer, and I can watch some planes landing.

Coming in for landing: A bit tricky to get to, but a fun quiz in a cozy atmosphere. 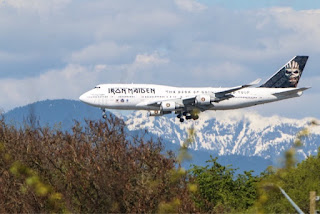 Posted by Vancouver Pub Quizzes at 20:53