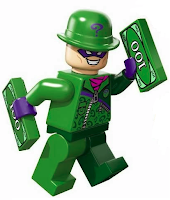 Team Info: Most teams seemed to be of about four or five people, but I don't know if there is a limit or not.

Prizes: Prizes galore! Mostly cash based, but there is also an auction at the end of the evening where you can use "Riddler Bucks" to bid on all sorts of things. More on those later.

Format: A complete gong show, in the best possible way. See the body of the review.

Food and Drink: Cheap drinks, as is the style at veteran's clubs around the country. Microwave popcorn available. Cash only.

It is kind of hard to explain Trivia Night with the Riddler in any meaningful capacity. I've only been once, and it is my understanding the quiz has a very amorphic structure. As such, I can only tell you what I saw, and how I felt about it. Spoiler warning: I had a fucking blast.

The Army, Navy, and Airforce Veterans Unit Taurus #298, as it is properly called (and henceforth shortened to ANA, not to be confused with the airline I just flew home on), is located in a whitesided building at 23rd and Main in the heart of Mount Pleasant. You may have been their for one of their excellent and lively karaoke nights, or their pinball machines, or just for some shuffleboard. The crowd it draws in is different from most places, packing in a lively crowd of veterans and old regulars. You'll find some stray skinny jeaned hipsters mixed in there as well, as befits the locale, but on average the crowd here skews about a generation and half older than most pub quizzes. The beer is fine, and priced very kindly. It is a members only club, so you'll need to sign in at the bar and abide by their rules, which includes doffing any cap you happen to be wearing.

I consider myself more or less a traditionalist when it comes to doing pub quizzes: I like having questions asked of me, for a certain number of points, which are then tallied up, and the team with the most of said points being declared the victors. Trivia Night with the Riddler doesn't play by those rules, really. I mean, there are teams. There is head to head competition, and prizes are involved. The questions are knowledge based. There are scores. But the similarity more or less ends there, as the Riddler gleefully deconstructs the notion of how you can have fun answering questions at a drinking establishment.

The quiz was broken up into five or six rounds, depending on how you're keeping track. It starts with some toss up questions, where the first person to shout out the answer gets two bucks in cold, hard, polar bear adorned cash. This was followed by a "match the company to the slogan round," for which points were doled out. These points were then wagered in the next round, Final Jeopardy! style, where each team got their own personalized question, while the rest of the bar spectated. The top score after two rounds of what are essentially double or nothing questions won the first half prize: money, both legal tender and the aformentioned Riddler Bucks.

The intermission saw us treated to feats of magic and prestidigitation, to set the stage for the second half. The second half was similar to the first, with another toss up round, but this one featuring audience authored questions — stump the crowd and the toonie is yours. This was followed by a "Guess the Snack Price" round, and then the "Brain Twister" round, which was pretty much standard trivia. Closest to the snack price wins the snacks, and top score wins the cash. After all was said and done, a small auction was held where you could use any Riddler Bucks your team had accumulated to wager on a small supply of prizes, which consisted of varied Canadiana. Think ANA articles of clothing, box sets of Corner Gas, and the like.

Riddle Me This: An unbridled delight. If you are sitting around on a lazy Sunday jonesing for some unorthodox trivia, this is the place to be.

Posted by Vancouver Pub Quizzes at 17:04